The latest KPMG AND REC, UK REPORT ON JOBS has just been published featuring survey results from Mid May

The results have glimmers of hope but it should be remembered that the survey frames the questions asked with respect to the previous month which was unprecedently bad.

May survey data indicated that hiring activity remained weak across the UK, as permanent placements and temp billings both fell at the second-sharpest rates on record. Recruiters frequently mentioned that the pandemic had led clients to cancel or postpone recruitment plans until the outlook improved.

Recruitment consultancies signalled the quickest expansion in overall candidate availability since July 2009 during May. The upturn was driven by steeper increases in the availability of both permanent and short-term staff. Panellists often linked higher candidate numbers to redundancies and staff being placed on furlough.

Permanent starter salaries fell for the second month running in May, and at the quickest rate since February 2009. Temp pay meanwhile declined at the fastest rate for 11 years. Recruiters often mentioned that weak demand for staff and budget cuts at clients had driven down pay in May.

Overall vacancies fell at a substantial pace in May, despite the rate of reduction easing from April’s survey record. Marked drops in demand continued to be signalled for both permanent and temporary workers, with the former noting the steeper rate of contraction. 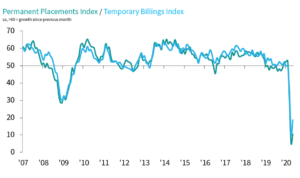 The seasonally adjusted Permanent Placements Index remained well below the neutral 50.0 value in May to signal a further decline in permanent staff appointments. Although the pace of contraction eased from April’s all-time record, it was nonetheless the second-quickest in over two decades of data collection.

Demand for staff declined across both the private and public sectors during May.

The steepest reductions in vacancies were once again seen in the private sector, though demand for public sector staff also fell at a historically sharp pace.

Permanent placements fell sharply across all four monitored English regions in May, led by the North of England.

Nine of the ten job categories registered a fall in demand for permanent staff during May. The steepest reduction was seen in Retail, closely followed by Hotel & Catering. Nursing/Medical/ Care was the only sector to record higher vacancies.

Latest labour market data from the Office for National Statistics (ONS) indicated that total job vacancies across the UK declined by -24.7% on an annual basis in the three months to April, which marked the quickest rate of reduction since the depths of the global financial crisis in 2009. 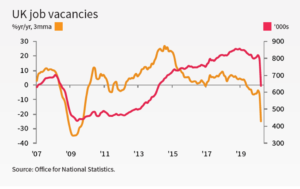 However, the KPMG/REC UK report on Jobs also featured data from the Recruitment and Employment Confederation’s survey of employers stating levels of confidence in hiring had improved by 11 percentage points, to net: -10.

They also state that employers’ intentions to hire permanent staff in the next three months rose from net: -9 to net: -5 and that employers’ intentions to hire staff in the next 4-12 months has remained positive throughout this period. Medium-term demand now sits at net: +6 for both permanent staff and temporary agency workers. “We can be sure that firms will start to hire staff in the coming months, and the economy will recover as they do”

“Lingering uncertainty around the COVID-19 pandemic, and when the outlook may improve, continues to take its toll on the UK jobs market.

“Hiring plans which were put on hold in March remain on ice, with many businesses focusing on maintaining their current staff rather than expansion or replacement.

“The number of people looking for work has risen at the quickest rate since July 2009 making it a highly competitive market. With a potential July stimulus package from the Government set to include a focus on retraining and skills, adaptability will be the key to success for jobseekers in 2020.”

“Given the impact of the lockdown in early May, it’s no surprise that these figures look bleak. But in the two weeks since this data was collected, lockdown rules have been eased and the feedback we get from recruiters every day suggests that the slight improvements that we can see in the placements and vacancies data have continued. I’m also hearing from business leaders all over the country that things are starting to look up. There is a long way to go, but it’s time to talk about how we recover from this crisis.

“Collaboration between government, businesses and recruiters will be vital as we try to get the economy up and running again. The UK’s staffing and recruitment companies are experts at helping people find work, and we are ready to support jobseekers in the months ahead.”