The authoritative KPMG AND REC, UK REPORT ON JOBS has just been published featuring survey results from Mid April.

The results are simply jaw-dropping.

Permanent placements and temp billings fell at rates far exceeding those seen even at the height of the global financial crisis.

The latest survey data signalled a back-to-back monthly drop in permanent staff placements across the UK. The rate of contraction accelerated to by far the steepest in the 22-year series history as the UK faced strict lockdown measures as part of efforts to slow the spread of the COVID-19 virus. Temporary company closures, social distancing and uncertainty around the outlook led to widespread recruitment freezes and delayed hiring decisions, according to panel members.

Furthermore, approximately 92% of the survey panel registered a fall in permanent placements, compared to just 3% that saw a rise. 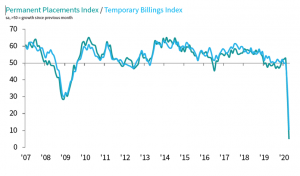 The pandemic also weighed on demand for staff as uncertainty over the outlook, including the longevity of any measures to contain the virus, led businesses to reassess their staffing needs.

The seasonally adjusted Total Vacancies Index dropped sharply from 43.8 in March to just 9.3 in April, to signal a back-to-back monthly fall in demand for staff. The latest reading pointed to the sharpest reduction in vacancies since the survey began in October 1997 by a considerable margin.

Permanent starting salaries declined at the quickest rate since March 2009, while pay awarded to short-term staff dropped to the greatest extent since July 2009.

Unlike in March, April data highlighted a broad-based decline in staff vacancies across the public and private sector.

The most severe falls in demand for staff were seen for permanent and temporary workers in the private sector. That said, the public sector also saw record declines in vacancies for both permanent and short-term staff. 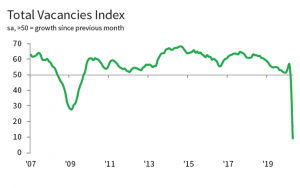 Substantial falls in demand for permanent workers were seen across all monitored job categories except for Nursing/Medical/ Care in April. The nine sectors posting falls all saw record rates of decline, led by Hotels & Catering.

Record rates of decline were recorded across each of the four monitored English regions during April, with the most marked fall in the North of England. Meanwhile, the South of England reported the softest decline.

April data also highlighted a further drop in temporary billings at the UK level, with the rate of decline the quickest recorded in over 22 years of data collection. The reduction was broad-based across the four monitored English regions and led by the Midlands, while the North of England reported the slowest pace of decline.

“The COVID-19 pandemic continues to wreak havoc on the UK jobs market with a record drop in vacancies and recruitment plans frozen.

“The uncertainty over the outlook is weighing heavily on the nation – we estimate that as many as 13 million jobs are highly affected by the lockdown, representing just over a third of all jobs in the UK.

“It’s an unprecedented situation for UK business and resilience, then recovery is key to navigating through the crisis. Easing current restrictions [means] confidence in the jobs market can start to rebuild.”

“While fighting the virus must remain our priority, the strain the lockdown is placing the economy under cannot be sustained indefinitely without very significant and long-lasting effects on unemployment and job creation.”

“The good news is that the capacity for our economy to recover quickly is definitely there – but we won’t get back to strong growth instantly when the lockdown eases. The government needs to work with businesses to ensure that the support they have offered tapers out as the economy returns to normal, rather than leaving firms facing a cliff edge and having to cut costs quickly through things like higher redundancies. This approach will also allow firms to invest in the future – creating new jobs to drive the economy and help the UK bounce back.”