The question I’m most asked is about market conditions.

My response has generally been a variant on “it’s quiet but I’ve seen worse”.

By way of a more statistically significant picture, the monthly REC/KPMG Report on Jobs has just been published with as close to real-time information as I’ve seen, from over 400 recruiters.

The unsurprising news is that there was a fourth successive monthly drop in the number of people placed into permanent jobs. However, the rate of decline eased notably from the records seen in April and May but remained sharp overall.

Appointments fell across the country: the steepest reduction was seen in London, while the least was in the Midlands. 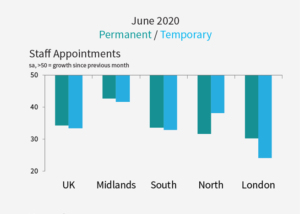 Data showed a softer, but still marked, reduction in the number of total vacancies registered in June across both permanent and temporary roles. Again rates of decline were not as severe as those registered in April and May. 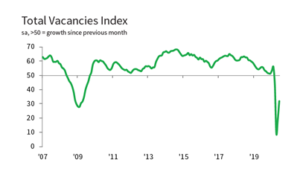 Nursing/Medical/Care noted the lowest rate of decline while the steepest drops were seen in Hotel & Catering and Retail.

News of the sharpest rise in candidate availability since January 2009 will also come as no surprise. It was noted that many staff placed on furlough were seeking new roles due to concerns they too could be made redundant.

The final piece of misery is a third successive monthly decline in salaries.

“Despite an inevitable further drop in hiring activity for permanent and temporary
staff, it is encouraging to see they both fell at softer rates than seen in April and May.

“However, the air of uncertainty around the COVID-19 pandemic will linger – and
rebuilding confidence in the UK jobs market will take time.”

A glimmer of hope? It’s still getting worse…. but more slowly.